This post was originally published on my LinkedIn page 5/19/16: https://www.linkedin.com/pulse/article/never-let-em-see-you-bleed-teaching-lessons-from-alligator-heintz/ 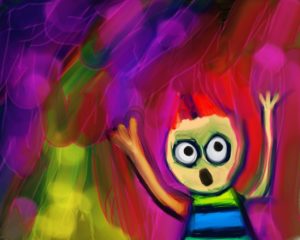 As you may recall from the previous post (5/18/16), I was last seen losing control of a baby alligator, Arthur*,  during a live Field Demonstration in the Children’s Zoo.

*Not his real name.

I was horrified. First, because I was about to drop Arthur and I worried for his safety. Second, because I had no idea what caused him to strike, nor what he might do if dropped. Third, and almost more importantly, because I had turned this amazing, exciting informative experience into a horror show for this family and all the 30+ visitors who now huddled in groups at what (they thought) was a safe distance away. I was terrified of the danger for all of us. I wanted to run and get help from a staff member who surely could fix this problem, but I knew it was not safe to leave a loose alligator walking freely among people in the zoo. This was supposed to be enlightening. Educational. Fun. Not panic inducing! People were supposed to leave us having learned about the wonders of alligators, not fearful of them!

I quickly managed to get people moved further away and then stooped low enough to allow Arthur to drop safely to the ground so that I could grasp him again, as trained, and whisk him back to his shelter. Once I had Arthur firmly in my arms again I paused to take a deep breath and thank him for allowing me to renegotiate our time together. And then I had to face the sea of terrorized onlookers. In that instant, I understood the sign above the door. Thankfully, no one was literally bleeding, but damage had been done. I did not have a “script” for how to handle this moment, but I realized that I had to work some sort of magic in order to enable the crowd to still leave with a positive feeling and experience in our zoo.

Instead of darting back to the safety of the volunteer building, I spoke slowly, calmly, in a gentle voice–as much to calm myself and Arthur as the bystanders. I coaxed a smile back on my face and explained as I moved ever-so-slowly toward the outlying crowd that as “startling” as Arthur’s movement had been, it was completely natural for the alligator who sees nothing but greenery, smells the fish, hears the water running in the nearby pond and feels the warmth of a sunny day. For Arthur to get excited and want to go out and explore the world is very much like what we humans might do–in fact, what the visitors were doing at the zoo right that minute. Exploring, taking in all the sights, sounds, smells and feel of the zoo–learning about the environment! As I slowly made the rounds (keeping a good few feet between the people and Arthur), I helped them realize that natural behavior may be different from species to species, but it all serves a purpose, and, once understood, need not be feared.

Stay tuned for the epic insight in Part III!

Sound Off: If you were an onlooker in this scenario would you have run away or stuck around to see what happens next? Why?

I'm Lisa Heintz, a 30-year veteran of teaching at the pre-K, elementary, high-school and professional-development levels.