Are We There Yet? Diversity in Picture Books 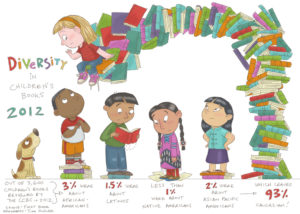 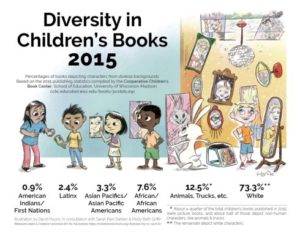 These two (rather fuzzy) graphics recently came to my attention and I was immediately intrigued by the topic. It was pleasing to see the shift in the number of Caucasians represented in children’s picture books in the latest survey (down about 20%!). At first glance, this seems like a tremendous change in the characterization and illustration of children’s book characters, presumably intended to better represent our diverse nation.

According to the most recent US Census (2010), of those who identify themselves with a single race, Caucasians represent approximately 64% of the nation’s population, followed by 16% Hispanic/Latino*, 12% Black/African-American, 5% Asian, and .7% Indigenous (Native American/Alaskan Native).

If you see the graphics clearly enough you might notice one striking difference besides the numbers: The 2015 Infographic includes an additional category: “12.5% Animals and Trucks.” What?!

It turns out that of all the children’s books published per year, about 1/4 of them are Picture Books (which, by definition, means that the illustrations are as important–if not more–to conveying the story as the words). Of that 25%, half contain non-human characters–rabbits, elephants, chickens, dump trucks, trains, etc. Thus, 12.5% of all picture books do not contain human characters to begin with. As that fact is not reflected in the original 2012 graphic, it can be a bit misleading.

So what does this mean? Well, in may mean that although the use of Caucasian characters is down by 20% the use of non-human characters may actually be on the rise! I have no proof of that, but it is a real possibility that the graphic doesn’t clarify. Regardless, I am heartened by this information. To me it indicates that people–publishers, parents, children, teachers and other “stakeholders” are starting to pay attention to the disporportionate amount of Caucasian representation in children’s picture books. It indicates that stakeholders are seeking more opportunities for diversity in children’s everyday lives–at home and at school. And it means that publishers will ultimately strive to do a better job of reflecting our culture in its many, varied forms.

Change is always challenging, and it rarely floods in–it tends to trickle slowly, both internally and externally. Old habits die hard for most of us. It may seem disingenuous for a teacher to modify his/her book collection with the intent of representing more diversity; most may think it should just be an organic process. But I challenge that notion, because if we wait for that to occur organically it may be years before our bookshelves actually reflect the diversity that is no doubt present in most classrooms.

Complacency with the status quo in this situation is not a good thing; people who purchase books for children need to continue to insist on reflecting the times in which stories are published. But there is hope in the books I see coming out today. Different worlds, different people, different dreams are being modeled through the pages of the all-important picture book–and being fulfilled by the readers who embrace them.

What steps have you taken to increase the diversity of your book collection?

This notion applies to music, too! We live in a world RICH with music from all nations and genres, so why not blend in the music of your students’ heritage as well? On LSS4L you’ll find a growing collection of songs in Hebrew, French and Spanish! Even a different genre is a nice place to begin–if you provide a steady diet of contrived songs (created specifically for teaching a skill), how about some fun songs for movement? Songs with a message of hope, friendship or silliness? If you always use children’s music in the classroom, why not branch out and try some kid-friendly classical or country music?

Trying a different music genre is also a nice place to begin. If you provide a steady diet of contrived songs (created specifically for teaching a skill), how about some new songs for movement? Songs with a message of hope, ecology, friendship or silliness? If you always use children’s music in the classroom, why not branch out and try some kid-friendly classical or country, or pop music? “Happy” by Pharrel Williams, “Firework” by Katy Perry, “Grandma’s Feather Bed” by John Denver, or an old country-folk song like “All Around the Kitchen.”

If you want to dip your toe in the Classical pond, see these good suggestions from Let’s Play Music: http://www.letsplaykidsmusic.com/14-best-classical-music-tracks-for-kids/

Your efforts do not have to be huge nor perfect–but your children (at home and at school) will appreciate the variety as well as the message you model: Diversity in all its forms is the spice that makes life delicious!

*Diversity moment: “Hispanic” refers to LANGUAGE — people who speak Spanish. This excludes Brazilians because they speak Portuguese. “Latino” refers to a GEOGRAPHIC region — all people of Latin American origin which includes Brazil, the Caribbean, South America and Central America but NOT Spain (where Spanish is the main language). These categories were established by the US Government in the 1970s as a means of differentiating immigrants and descendants. While many Americans use the terms interchangeably, that is technically inaccurate and can be offensive to some. To avoid any further racial misnomers I would liken it to being a female–some women don’t mind being referred to (in a group setting), as “guys,” while other women might find that offensive and prefer “Ladies” or even “Girls”. The same can be said for expressions like Miss, Ms. or Mrs. which are intended to identify your age and marital status. Some women find the terms relatively harmless and exchangeable while others are put-off by the wrong (or any!) moniker. It is important to know the preferences of those in your own life and speak accordingly. For the purpose of this writing, however, we will stick to the standard categories used by the Census Bureau.

I'm Lisa Heintz, a 30-year veteran of teaching at the pre-K, elementary, high-school and professional-development levels.